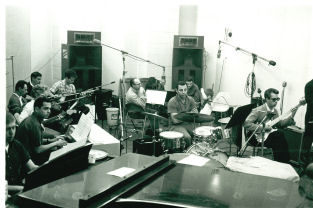 The music documentary The Wrecking Crew featuring the great studio musicians from Los Angeles who recorded countless hits in the nineteen-sixties comes to Nashville on Thursday, April 24th.

It will be shown at 7:00 PM as part of the Nashville Film Festival at Green Hills Cinema. Some of the legendary studio musicians will be present at the screening.

Besides the officially confirmed attendance of piano player Don Randi and bass/ukulele player Lyle Ritz it is rumored that guitar and producer/arranger legend Billy Strange (“These Boots Are Made For Walkin'”) will be present together with his wife Jeanne Black who was a singer in the nineteen-fifties and sixties (“He’ll Have To Stay”).

At 09:00 pm there will be a closing night celebration at the Cannery Ballroom with live music played by some of the musicians who are featured in the documentary.