This exclusive reunion takes place after the Los Angeles premiere of Denny Tedesco’s documentary movie The Wrecking Crew as part of the Grand Performances Program in downtown Los Angeles. According to Carol Kaye’s forum Glen Campbell and Nancy Sinatra will probably perform, too. Though this has yet to be confirmed.

In the nineteen-sixties Carol Kaye, Hal Blaine, Don Randi and Chuck Berghofer were part of a big group of Los Angeles studio musicians – many of them jazz musicians – who worked day and night in the music studios. Together they left an indelible sonic mark upon thousands of pop songs, movie soundtracks and commercials. They actually were not a group. Studio musicians were all hired individually, usually by contractors. But because they performed together on famous records, music lovers and journalists often wrongly think that the studio musicians were a kind of a rock band.

You ask for more? Fine, here are some movie and TV soundtracks they played on: Mission Impossible, Planet Of The Apes, The Bill Cosby Show, Streets Of San Francisco, Butch Cassidy And The Sundance Kid, In The Heat Of The Night and, The Pawnbroker, Airport and, and, and…

There’s a positive review of the music documentary The Wrecking Crew on the Variety website. The documentary features some of the Los Angeles studio musicians who recorded many of the hits of the nineteen-sixties. 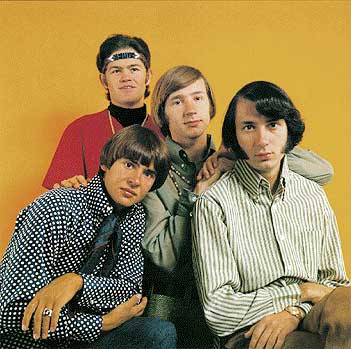 Like most US rock and pop groups of the sixties, the Monkees didn’t play on their hits, they only did the singing. They were in good company: The Beach Boys, the Mama & Papas, the Ventures, the Carpenters, Paul Revere & the Raiders, the Byrds and many more relied on studio musicians.

In Hal Blaine’s biography (studio drummer from Los Angeles) there’s an amusing part about how the Monkees’ record company tried fighting the rumors that were going around in 1967, that the Monkees didn’t play their instruments on the records:

I remember one day in Studio A at RCA we were making Monkees records in a studio the size of an aircraft hangar, with all the doors locked and “closed session” signs all over. Next door, in Studio C, The Monkees sat at their instruments making music for the press. The studio bosses had set up the session to squelch the ugly rumors, and the boys gave a convincing performance. Eventually, things cooled down, and later that year I got a call from band member Michael Nesmith (he of the drawl and knit cap) asking me to contract some musicians for a few dates.

Soon a documentary called The Wrecking Crew will be released. It tells the story of the Los Angeles studio musicians.

According to bass player Carol Kaye however – who worked as a studio musician in Los Angeles from the fifties until the seventies – the name “The Wrecking Crew” wasn’t used in the sixties. On her homepage she puts the record straight:

Where did the term “wrecking crew” come from?

That is the name of Hal Blaine’s interesting book about our business. He said the older studio musicians tho’t we 60s studio musicians are going to “wreck the business”, the way we dressed and recorded rock and roll (blue jeans, no shaves sometimes…we worked around the clock, even as many as 4-5 recording dates a day).

To be honest with you, no-one heard that term until he put out his book (about 1990). He got his term (imo) from the backup 80’s NYC group for singer Darlene Love. Our group (50-60 of us) of successful 60s studio musicians were known only as “studio musicians”, or sometimes as the “clique”, never the “wrecking crew” at all (and most don’t like that sort of passe term also).

Phil Spector probably used Earl Palmer on drums more than Hal, so the term didn’t come from Phil either….there were about 350 fine studio musicians making good money steadily (“doctors’ pay”) in recording in LA studios at that time, but most of us are retired and there’s less work for studio musicians these days.

There’s another misconception regarding the studio musicians of the sixties that I think is more disturbing than the fact, that the name “The Wrecking Crew” apparently wasn’t used back in the sixties. Because of the now well known name “The Wrecking Crew”, many journalists and music fans think, that studio musicians like Blaine, Kaye, Don Randi, Plas Johnson, Billy Strange, Tommy Tedesco and others were a kind of band. Which is not true.

In fact, they all were hired individually for recording sessions, usually through a contractor and they all worked independently. In Earl Palmer’s Biography “Backbeat” (Da Capo Press) there’s information about how the contracting business in Los Angeles worked back in the nineteen-sixties.

See also: The Invisible Musicians Who Played On All The Sixties Hits. 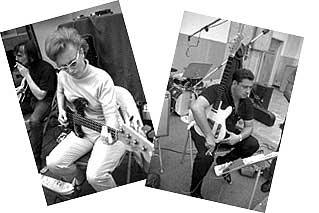 Denny Tedesco, son of the late studio guitar master Tommy Tedesco, made a movie called The Wrecking Crew about the great studio musicians of the sixties who worked in the Los Angeles music studios.

The documentary will be shown in March at the Buffalo Niagara Film Festival and at the SXSW in Austin, Texas. In April it will be shown at the Nashville Film Festival. You can find further information on the Wrecking Crew Movie Homepage.