This exclusive reunion takes place after the Los Angeles premiere of Denny Tedesco’s documentary movie The Wrecking Crew as part of the Grand Performances Program in downtown Los Angeles. According to Carol Kaye’s forum Glen Campbell and Nancy Sinatra will probably perform, too. Though this has yet to be confirmed.

In the nineteen-sixties Carol Kaye, Hal Blaine, Don Randi and Chuck Berghofer were part of a big group of Los Angeles studio musicians – many of them jazz musicians – who worked day and night in the music studios. Together they left an indelible sonic mark upon thousands of pop songs, movie soundtracks and commercials. They actually were not a group. Studio musicians were all hired individually, usually by contractors. But because they performed together on famous records, music lovers and journalists often wrongly think that the studio musicians were a kind of a rock band.

You ask for more? Fine, here are some movie and TV soundtracks they played on: Mission Impossible, Planet Of The Apes, The Bill Cosby Show, Streets Of San Francisco, Butch Cassidy And The Sundance Kid, In The Heat Of The Night and, The Pawnbroker, Airport and, and, and…

The UEFA euro football cup 2008 will certainly have many highlights. The singing of the national anthems though won’t be one. What football players do best is playing football – not singing national anthems.

If you love football and big band jazz you should get yourself Stan Kenton’s “National Anthems Of The World”. You can download it on iTunes. While the football players are trying to sing their national anthems you can turn down the volume of your tv set and play Stan Kenton’s versions instead.

“National Anthems Of The World” was recorded in 1972 and arranged by Robert Curnow. It was issued as a double LP by the Creative World label (ST-1060). If you’re a vinyl lover, get your copy at GNP Crescendo. 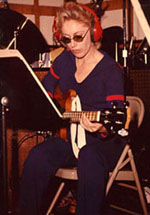 In a great NPR interview Carol Kaye not only tells about how she started playing jazz guitar and became an innovative electric bass player, but she also plays live on guitar and electric bass. Actually it’s more a music lesson about how pop music was played in the sixties than just an interview.

If you love the music of the sixties make sure to listen to it. You get first hand information from the woman who recorded with Ray Charles, Sam Cook, The Doors, Ritchie Valens, Joe Cocker, Barbara Streisand, the Beach Boys and many others.

Some productions of the legendary German jazz label MPS are available now on CD or as download. The webpage of the German jazz magazine JazzEcho gives a good overview of the MPS reissues series and provides plenty of hearing samples.

Related: Most Perfect Sound From The Black Forest