Nashville studio guitarist Ray Edenton is a legend of the rhythm guitar. His guitar was an important ingredient of the so called classic “Nashville Sound”.

He created this timeless sound together with among others guitarist Harold Bradley, drummer Buddy Harman, and bass player Bob Moore.

Ray Edenton’s playing gave a defining edge to immortal songs like Crazy (Patsy Cline), Some Day’s Are Diamonds (John Denver), Till I Get It Right (Tammy Wynette), Chug a Lug (Roger Miller) or Wake Up Little Susie (Everly Brothers).

Now the Ray Edenton Website is online. It includes a short biography and there’s a wonderful collection of songs.

See also: Ray Edenton And The Secret Of His Nashville Guitar Tuning 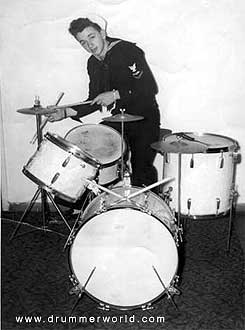 Roy Orbison’s “Pretty Woman” has a simple, but great opening: a pounding snare on every downbeat, and the hi-hat on the eights. It takes a genius to keep it simple and make it sound distinctively at the same time.

The genius in this case is Buddy Harman, a Nashville studio drummer who was essential in shaping the classic and sophisticated “Nashville Sound” in the late nineteen-fifties and early nineteen-sixties.

You’re not sure, if you ever heard him play? Don’t worry, you heard him countless times. He played on many classic country and pop hit records such as Crazy (Patsy Cline), Bye Bye Love (Everly Brothers), Ring of Fire (Johnny Cash), Stand By Your Man (Tammy Wynette) or Viva Las Vegas (Elvis Presley). According to Drummerworld he played on 18,000 recording sessions in the last 40 years.

Listen to “The Drum History Minute”, a short but very informative introduction to Buddy Harman’s style of drumming narrated by drummer Daniel Glass:

This little piece of audio is a real ear opener and you will treasure the fine and discreet drumming of Buddy Harman even more next time you hear him playing.