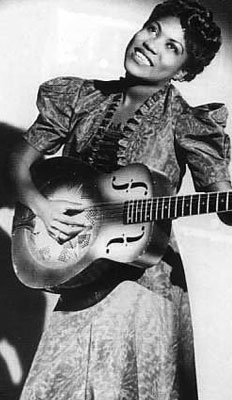 . Sister Rosetta Tharpe (1915 – 1973) was a great Gospel and Rhythm and Blues singer and an innovative guitarist. Her guitar style influenced Chuck Berry and her animated style of singing was picked up by Little Richard. She started her career in Pentecostal churches, performed with Lucky Millinder & His Orchestra, played the Cotton Club, the Apollo Theater, Carnegie Hall, and the Grand Ole Opry. All the same, her name has been forgotten for many years.

Sister Rosetta Tharpe was not only a Gospel star, a guitar virtuoso, and a forerunner of Rock and Roll. She also was a dazzling personality. As a successful black musician and business woman who loved men and women, she definitively was ahead of her time. And like so many Gospel singers she was caught between religious and worldly music. Singing worldly music meant making more money and more fame, but losing the church audiences and having a guilty conscience. In the first two decades of her career Sister Rosetta Tharpe oscillated between worldly and religious music. Then, in the late fifties and through the sixties, she concentrated on Gospel again.

Gayle F. Wald wrote the biography. She’s an professor of English. Her academic background shines through, she relies on the facts and doesn’t get lost in speculations. She interviewed dozens of people who knew Sister Rosetta Tharpe. Wald doesn’t hide conflicting memories of the interviewees. She writes straight and unagitated. It’s a sober biography that gives plain information. Where the facts are concerned, the soberness is appropriate. Unfortunately the soberness also shows in the scarce number of pictures and the rudimentary discography.