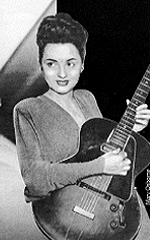 When was distortion used on electric guitar for the first time? There are several myths around. The best known says that Ike Turner – who recently passed away – was the first one to include a distorted guitar on Rocket 88. This song was recorded at Sun Studios, Memphis, in 1951. Wrong!

Another widespread myth says that Link Wray was the first one to use a distorted guitar on “Rumble”, an instrumental he recorded in 1958. Wrong!

Looks like jazz guitarist Mary Osborne is the first one who used distortion on her guitar. At least on this rather random list. Do you have any more examples of distorted guitar before 1951? Please let me know.