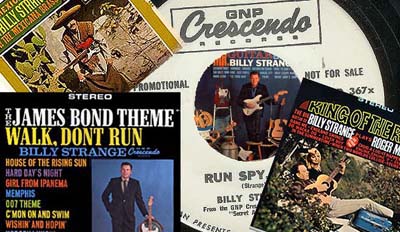 Thanks to iTunes you have access to a lot of material that hasn’t been issued in a long time. «GNP Crescendo Records» for example has reissued nine of Billy Strange’s instrumental records from the sixties on iTunes. Billy Strange had huge success with his version of the «James Bond Theme». For «GNP Crescendo Records» he recorded several LPs with contemporary Pop and Country hits and self written tunes.

Billy Strange started his career as a guitarist and singer in the forties. He was part of the West Coast Country and Western swing scene. He played with «The Sons Of The Pioneers», Roy Rogers, Spade Cooley and Smokey Rogers. Later he also performed with the «Cliffie Stone Hometown Jamboree». He recorded regularly under his own name from the fifties on. Besides that he recorded countless guitar parts for country and pop stars such as Johnny Cash, The Everly Brothers, The Beach Boys, The Ventures, and many more.

He also wrote successful arrangments. His most famous credits are the arranging of Nancy Sinatra’s «These Boots Are Made For Walking». He also arranged for Frank Sinatra, composed movie soundtracks, produced, and wrote the hit record «Limbo Rock». His instrumental records are only a small part of his many sided career.